In Memory of Bob Lutt 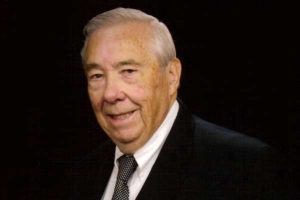 Bob Lutt was born in 1929 in small-town Nebraska. He attended the local public schools, graduating from high school in 1946 at the age of 15. His love of music started at home.

“I was very lucky to have a mother who was a magnificent singer. In the little town I grew up in there was a very good school band and she put a lot of effort into getting me involved with it. My first instrument was the trombone — I started when I was twelve.”

He entered Wayne State College in the fall of 1946, the first person in his extended family to attend college. His first love while in high school was football, but he also performed as a drum major with the marching band at halftime of his games. Although he intended to be a sports major at college a serious injury forced him to change his plans and he became a music major instead. He graduated with a degree in music and a teaching certificate in 1950.

Wayne State was also where he met a beautiful young woman named Beth Hart who received her teaching credential in 1949. Bob and Beth were married right after his graduation in 1950.

In 1950, Bob began his first teaching job at Oakland High School in Oakland, Nebraska, a town only 15 miles south east of where he had grown up. He immediately restarted the band and choral programs; these programs went on to win several superior awards at Nebraska music festivals and in 1954, Bob was selected as the Nebraska Band Director of the Year.

Bob went on to receive his Master’s Degree from the University of Colorado and in 1954 he was offered the job of Director of Bands at Berkeley High School in Berkeley, California, quite a change from small-town Nebraska. He and Beth moved to the big city which was to be their home for the next 57 years.

At Berkeley High, Bob went to work expanding and improving the band program. During his 20 year tenure at Berkeley High School his bands participated in the Winter Olympic Games at Squaw Valley, the World Expo in Seattle, the Rose Bowl in Pasadena, were invited to participate at Disneyland 10 times and had 15 years of straight superior ratings at California music educators festivals. His marching band appeared annually at University of California at Berkeley football games and in 1960 he was named Berkeley Young Man of the Year. 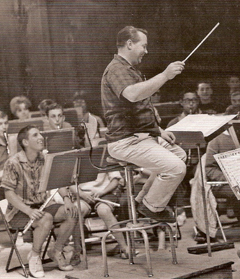 It was during this time, in 1957, that Bob created the second true love of his life, Cazadero Music Camp. It was somewhat serendipitous, he and Beth were both working incredibly hard but at some point they needed a break; here’s how Bob describes it:

I asked the principal where my wife and I could go for the weekend affordably and he mentioned a small camp in the redwoods. We went and we fell in love with the trees and creek. When I was in high school, I loved music camp, and Berkeley didn’t have one. Since the city owned the land, I asked if I could start a camp.

After some hard work getting the rundown campsite habitable, Cazadero Music Camp began.

In the summer of 1957 I took my band to Cazadero for the first time. It was an immediate success! I had friends in the San Francisco Orchestra, and although I couldn’t pay them, I could provide them and their families with a good time. They were the teachers, and more and more came. Then the Symphony changed the contract from nine months a year to twelve. So we got teachers from everywhere — they’d come for a week. We’ve had some very fine ones. We had 65 students the first year and after about eight years there were 800 kids coming each summer. We’ve had about 100,000 campers now total.

In 1975, after over 20 years with Berkeley High, Bob took a job with San Francisco State University as director of the concert band and music education departments. Here, he designed a program with the San Francisco Foundation to allow university music students to teach at Cazadero Music Camp each summer for a salary and college credits; Mr. Lutt retired in 1985 after 35 years of teaching.

Though he was done teaching professionally, he continued his life’s work of bringing great opportunities into the lives of young people through music. His next project was with his son William; they started a music production company called World Projects. The Lutts found festivals and projects the world over that were in need of musical content, bands of young people. Their first project was the 1988 World Expo in Brisbane, Australia with more than 4,800 students participating in the event. The Lutts then created festivals in Hawaii, the Sydney Opera House, Carnegie Hall, Japan, Singapore, London, San Francisco, New Orleans, Washington D.C. and designed worldwide performance tours for numerous high school and university music groups. In the year 2000, World Projects assembled 2,000 international students for a marching band for the opening ceremonies at the summer Olympic Games in Sydney, Australia

Bob retired from World Projects in 2005. He has been honored by the National Conference of Music Educators for Outstanding Achievement in 2010 as well as by the California Association for Music Education with the Hall of Fame Award honoring lifetime achievement in music education in 2009. In 2010, he was the local recipient of the Jefferson Award, in recognition of his outstanding service to his community by bringing music into the lives of thousands of young people. In 2000, the performance stage at Cazadero Music Camp was officially named The Lutt Family Amphitheater, and in 2009, with a new roof overhead, it was officially dedicated with a ribbon cutting ceremony; that same summer, Bob turned 80 and Bob and Beth celebrated their 60th wedding anniversary.

Bob has touched thousands of lives, inspiring them with music and love.

When I walk down Solano Avenue now, I constantly see people whom I taught. I see young people on the street who come up to me and talk about how good a time they’ve had at camp. I’ve had an incredible amount of help from my family. My wife’s been very active and all three of my children are musicians.” He sees his camp as a “sort of legacy that we can leave for future generations. It’s lasted fifty years and I hope it continues for another fifty!”

We are working diligently to make informed decisions about our plans to reopen camp while keeping our campers, staff, and extended community safe. You can click below to see our CazPAC Preliminary COVID-19 Safety Program. Click the "X" to close this notice.