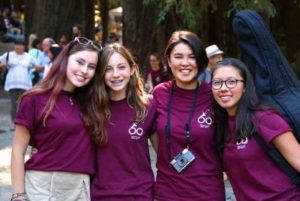 Dedicated non-profit professionals who share a passion for our mission—Cazadero’s administrative staff works tirelessly to bring the love of music and learning to youth. Our Cazadero Music Camp faculty and guest conductors are all highly accomplished practicing musicians and music educators. Counselors are all music students at the university level and Counselors-in-Training at the high school level. Even our kitchen and maintenance staff members are often musicians!

Cazadero selects staff not only for their musical skill but for their passion for teaching music and their ability to effectively mentor youth. We recruit guest conductors each year from top universities and high school music programs to lead the orchestras. The guest conductor program ensures ongoing variety and new musical challenges each week. Please visit our Jobs Page if you’re interested in applying for a summer job at Cazadero Music Camp. 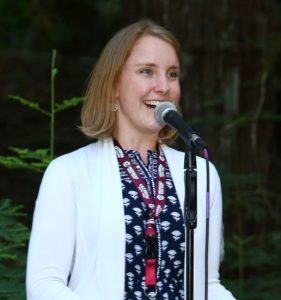 Emily Wainacht was appointed Executive Director of Cazadero Music Camp in 2016. She spent ten summers at Cazadero as a camper, counselor-in-training, counselor, and music instructor. Relocating from Los Angeles, Emily had been working for LA Opera since 2012 in addition to being an active freelance trumpet performer and teacher. She held a variety of roles with other non-profit arts organizations such as The Broad Stage, LA Chamber Orchestra, and the Oberlin Artist Recital Series.

She credits Cazadero for helping shape her musical path, eventually earning two degrees in trumpet performance: a Bachelor of Music from Oberlin Conservatory and a Master of Music from University of Southern California. She also earned a Bachelor of Arts in Mathematics from Oberlin College. She studied at Aspen Music Festival in 2010 and completed the American League of Orchestras’ Essentials in Orchestra Management course in 2015. Emily spends her time away from Caz figuring out this thing called parenting with her husband, Andrew, and her daughter, Penelope. 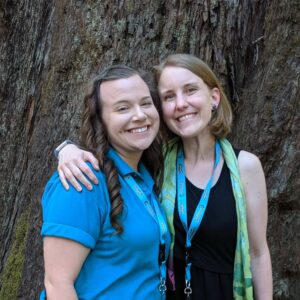 Ms. Niehaus holds a Bachelor of Arts degree in Music Education from the Conservatory of Music at the University of the Pacific in Stockton, CA. She has been teaching at Altimira Middle School in Sonoma Valley Unified School District since 2012 where she is responsible for two Concert Bands, Choir, Musical Theater/Drama, and Student Leadership in addition to serving as the Activities Director and Electives Department Chair. She also serves as the Coordinator for both the Sonoma County Junior High Honor Band and the annual Sonoma County Cazadero Jumpstart in Music weekend. Since locating to the Sonoma County area, Ms. Niehaus also continues to perform on flute in a variety of settings.

Carolyn was thrilled to accept the offer to serve as Music Camp Director starting in 2022. She looks forward to spending future summers at Caz, watching campers and staff experience the magic of Caz – her home away from home.

We are working diligently to make informed decisions about our plans to reopen camp while keeping our campers, staff, and extended community safe. You can click below to see our CazPAC Preliminary COVID-19 Safety Program. Click the "X" to close this notice.